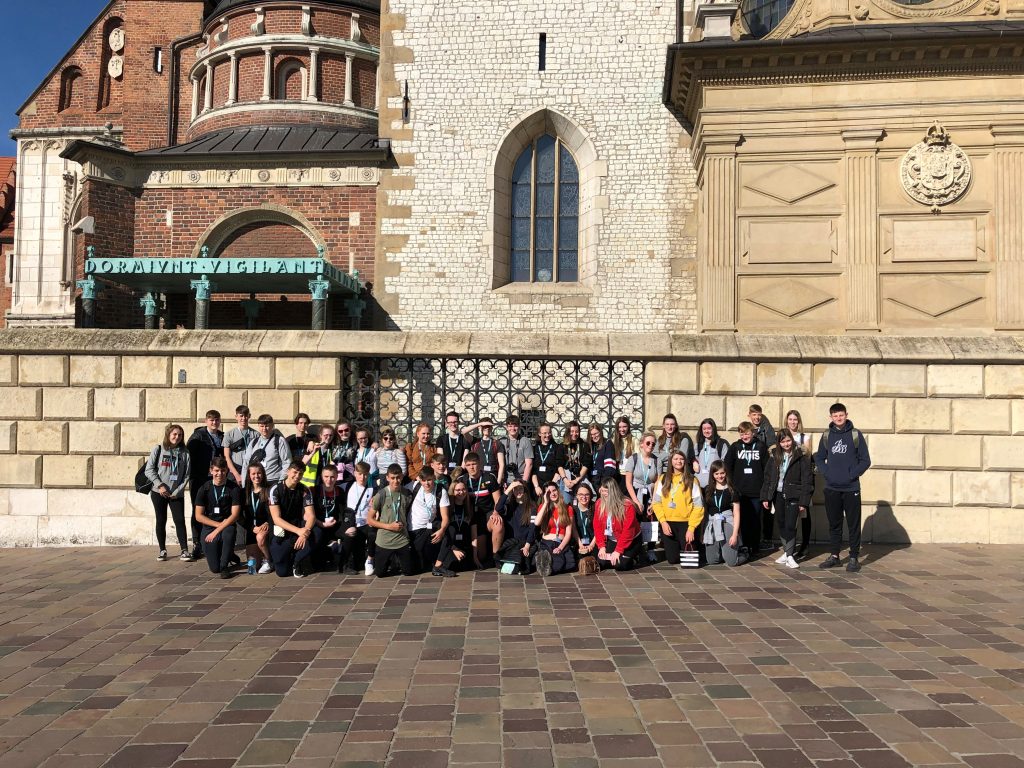 We have arrived in Kraków! The weather is fantastic, the sun is shining and the sky is clear.

We’ve had a great day walking around the old town, taking in the sights that the iconic square has to offer, including the cloth hall, the horses and carriages and the Basilica.

As we arrived, the clock had struck upon the hour and the sound of St. Mary’s Trumpet Call rang throughout the square. It certainly got our attention, as we squinted to see the trumpeter in the tower high above us.

After some free time to have a look around, we wandered up to Wawel Royal Castle, which looks stunning in the sunshine. We enjoyed looking around, observing tourists trying to capture the perfect selfie (before some of us attempted to do so ourselves!)

We’re looking forward to our meal tonight, and will hopefully be kept in good spirits with some traditional Polish folklore and dancing!

Today the majority of us woke up for 05:45, ready for our trip to Auschwitz and Birkenau.

Students have had an experience that they will remember forever. Despite the sun shining, the mood was certainly solemn. Students have had tours of Auschwitz and Birkenau, led by family members of Holocaust survivors. They have witnessed some of the most infamous places in recent history.

Eliza, Josh and Georgie all agreed that it was an eye opening experience, but a harrowing one.

We are currently travelling to Germany and are excited to begin our Berlin adventures tomorrow! 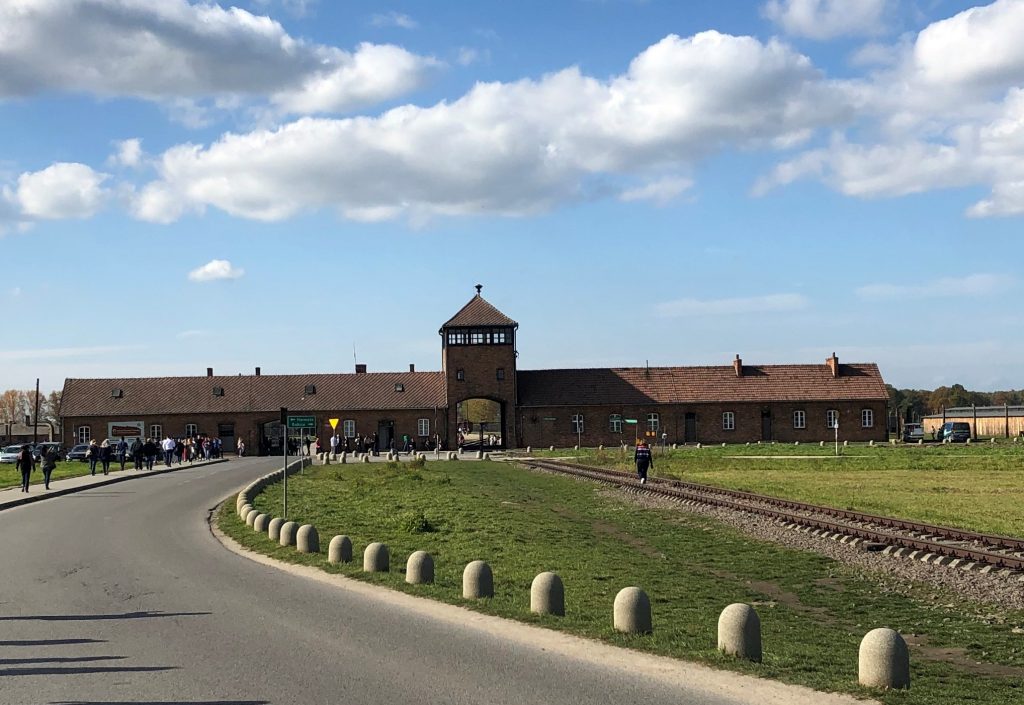 We’ve had a brilliant weekend in the beautiful Berlin.

Saturday saw us heading into Alexanderplatz for a bit of light shopping and an opportunity to spend some euros on gifts for those at home. Following this, we headed to Sachsenhausen concentration camp, in Oranienburg.

Students were given guided tours and were able to notice the many differences between camps that were built earlier on in Hitler’s regime, as opposed to those that came later (Auschwitz Birkenau for example.)

Hayden said, “Sachsenhausen was almost luxury in comparison to what we saw in Poland, I know it obviously wasn’t luxury, but it certainly seemed that the premises initially had a different purpose. It was explained to us that prisoners came in at ‘station A’ and only got to leave at ‘station Z’ this really put into perspective how systematic it all was.”

After our trip, we enjoyed a trip out into Berlin for some burgers and then retired to hostel, where some of us enjoyed games of Giant Jenga and Connect Four.

For Sunday, we had Mr. Rush’s Magical Mystery Tour of Berlin. Our soles are still aching from the walking but what we got to see made it worth it. Highlights definitely included; Checkpoint Charlie, The Berlin Wall and Humboldt University. Everywhere we visited was steeped in Berlin’s rich history.

John said, “I thought the tour was good because we didn’t just walk around museums and exhibits, we got to see bits of city that perhaps we wouldn’t have been able to see. My favourite part was the Holocaust Memorial, there are so many different interpretations you can make, which I think is very important.”

Logan jokingly added “the tour wasn’t really a mystery! But it was fantastic being able to see sights from textbooks and documentaries in the flesh.”

On Sunday night we ate in the hostel and students had free time afterwards. Many chose to play card games and participated in a wonderful Connect 4 tournament, designed, hosted and won by our current champion Celia. A nail biting final saw Celia defeat Josh and claim the title for herself. 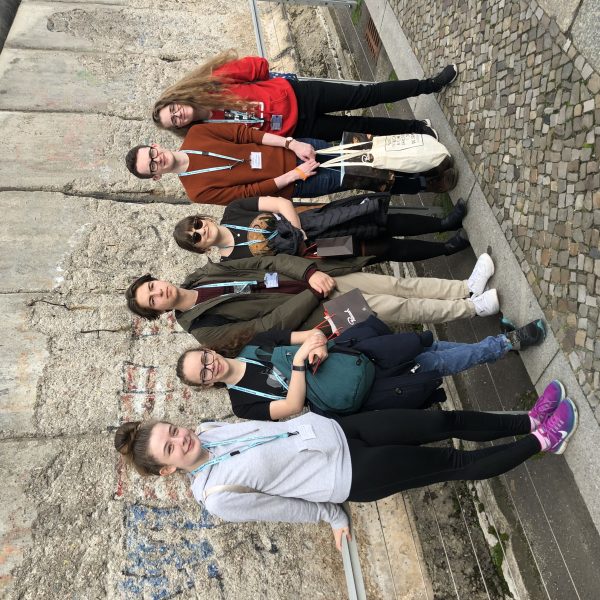 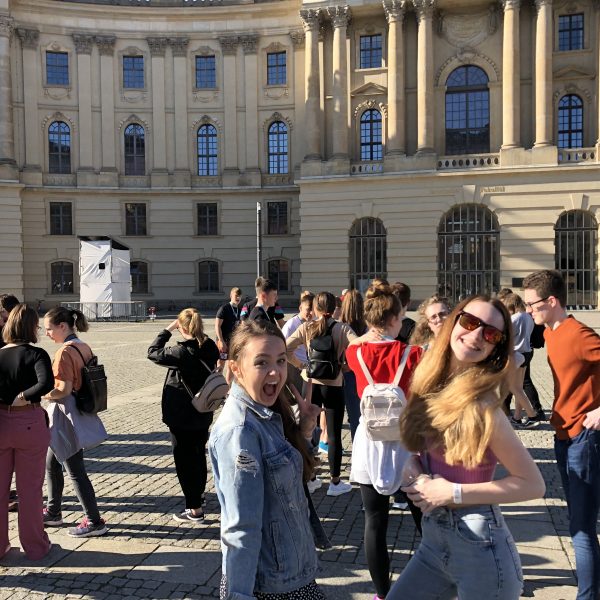 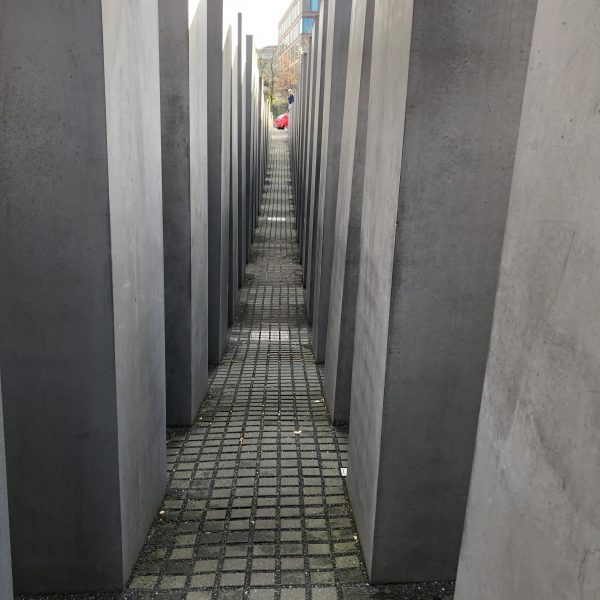